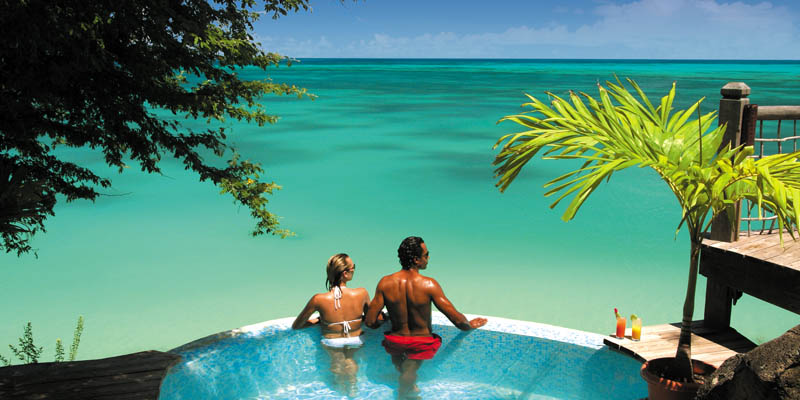 If you’re hoping to tap into the classic spirit of the Caribbean for an upcoming vacation, a good bet may be one of these very special West Indian hotels that hang onto the past, stylishly celebrating simpler times. Whether it’s preserved colonial architecture or a historic location, each offers a time warp to a different era. Be warned that a 17th- or 18th-century vibe can also mean no telephones, TVs, or air-conditioning. If those amenities are important to you, check with the hotel before booking.

Built sometime between 1670 and 1740, the great house of Hermitage Plantation on Nevis is a rarity in the Caribbean—a surviving relic from Alexander Hamilton’s and Admiral Horatio Nelson’s days on the island. The wood-shuttered structure, which is made out of the famously tough lignum vitae wood, and 15 gingerbread cottages are well cared for today by the Lupinacci family. The great house on the foothill of Nevis Peak is filled with antiques that aren’t too fragile to endure an evening of rum punches and a pig roast. hermitagenevis.com

Just down the road from Hermitage on Nevis is another survivor: Montpelier Plantation & Beach, one of the original 18th-century sugar plantations. It was here that Admiral Lord Nelson married Fanny Nisbet in 1787. The two-bedroom Little House villa, one of 19 modern accommodations, is within a century-old building. The 300-year-old sugar mill is open for dining. Montpelier shuttles guests down to its private beach. montpeliernevis.com

Admiral Lord Nelson made his rounds of the Caribbean, stationing himself for a spell in Antigua. Today the island claims the only surviving, and not modernized, Georgian dockyard in the world, Nelson’s Dockyard. Within the UNESCO World Heritage site is the 22-room Admiral’s Inn, housed in four 18th-century waterfront buildings, including a villa in a former gunpowder store. Bricks that make up the walls were formerly ballast. admiralsinnantigua.com

The Carmelites of Spain started construction of the wood-beamed El Convento in San Juan, Puerto Rico, almost 370 years ago. Much has changed since the 1640s: The convent is now a 58-room luxury hotel with three restaurants, a plunge pool, and a Jacuzzi—although a chapel remains. elconvento.com

Surrounded by sugarcane fields on Martinique’s northeast coast is the Creole-style manor house of Le Domaine Saint Aubin. Wraparound verandas, mahogany furniture, volcanic walls, and curios from the 1900s take guests back. The current caretaker-owners are linked to island life in the 1700s. domaine-saint-aubin.com

Since Lord Glenconner bought the Grenadine island of Mustique in 1958, real monarchy and rock monarchy have come to bask in its equatorial sun. To stay in the Champagne-and-canapés thick of it (relatively speaking, given that the population is 500), head to the iconic Cotton House, a former cotton warehouse converted into a romantic playground of fretwork and curiosities by theatrical designer Oliver Messel. A new Ila spa was added last season; this season, the great house will be renovated. cottonhouse.net

Tucked in the tropical rain forest of Soufrière on St. Lucia is the 250-year-old working plantation of Fond Doux. The 15 French Colonial fretwork cottages—some of which were moved from other island areas—were restored, then outfitted with four-posters and rocking chairs. A vacationer here can subsist on the verdant land’s spoils, including fresh-plucked bananas, breadfruit, mango, guava, and . . . cocoa. Cocoa harvesting and rolling is done right on the plantation.fonddouxestate.com

Forget George Washington; Christopher Columbus may have slept at the Hostal Nicolas de Ovando in Santo Domingo. The three stone houses built in 1502 for the governor of the same name are a maze of old archways, tropical courtyards, and colonial rooms. This is not a Dominican beach retreat but a historic one, located on Las Damas, the first paved road in the New World, and listed as a World Heritage site.

THE LATEST FROM GUILLE GARCIA: JALEO